Kahlon Law is one of the top-rated assault lawyers in Mississauga offering the best criminal defence services. We have years of experience in defending assault charges. Whether you’re facing minor charges or serious ones, we know how to fight all types of assault charges. Over the years, we have gained proficiency in defending people in criminal court. We have handled various types of assault charges including sexual assault, assault with a weapon, domestic assault, and more. We aim to find the best possible solution for our clients and strive to get the charges dropped completely or withdrawn through diversion programs, community service, donations, or a peace bond.

As experienced criminal assault lawyers, our firm determines all possible defences to assault charges against you such as self-defence. We highly recommend you to not give a statement to the police before you have talked to an experienced lawyer. Also, make sure you don’t give consent to have your cell phone or property searched without a proper warrant. When charged with assault, don’t waste time and immediately hire a lawyer to represent you. Having a qualified lawyer by your side increases your chances of getting a favorable outcome for the case.

What is considered an assault in Canada?

In simple terms, an assault occurs when one applies force intentionally to another person without their consent. An assault can also occur when a person merely attempts or threatens to intentionally apply force to another. The criminal charges may come under different names such as domestic assault, sexual assault, assault with a weapon, aggravated assault, and assault causing bodily harm.

A criminal defence lawyer can provide critical legal assistance if you have been charged with an assault or are being investigated. If you are convicted of assault, you could face a criminal record, jail time, and/or fines. An assault lawyer can help protect your rights and argue on your behalf in court. An experienced criminal lawyer may be able to get the criminal charge reduced or dismissed altogether.

What Are My Options In More Serious Assault Charges Such as Assault Causing Bodily Harm or Aggravated Assault?

In most cases where an accused is alleged to have committed a more serious offence such as Aggravated Assault or Assault Causing Bodily Harm, the assault lawyer will attempt to get the assault charge reduced or seek alternative measures in lieu of negotiating a resolution that could potentially result in jail time. Often bodily harm and aggravated charges require a trial as crown attorneys are less likely to negotiate a conviction-free resolution in such serious assault cases.

If you are being investigated for a serious offence such as an assault with a weapon or aggravated sexual assault, it is important that you seek out the assistance of an experienced assault lawyer who will be your strongest ally in protecting your rights and interests throughout this process. A criminal defence lawyer can help protect your legal rights by conducting a thorough investigation while gathering the evidence necessary to prove innocence or reduce charges.

What Are Four Types Of Assault Charges? 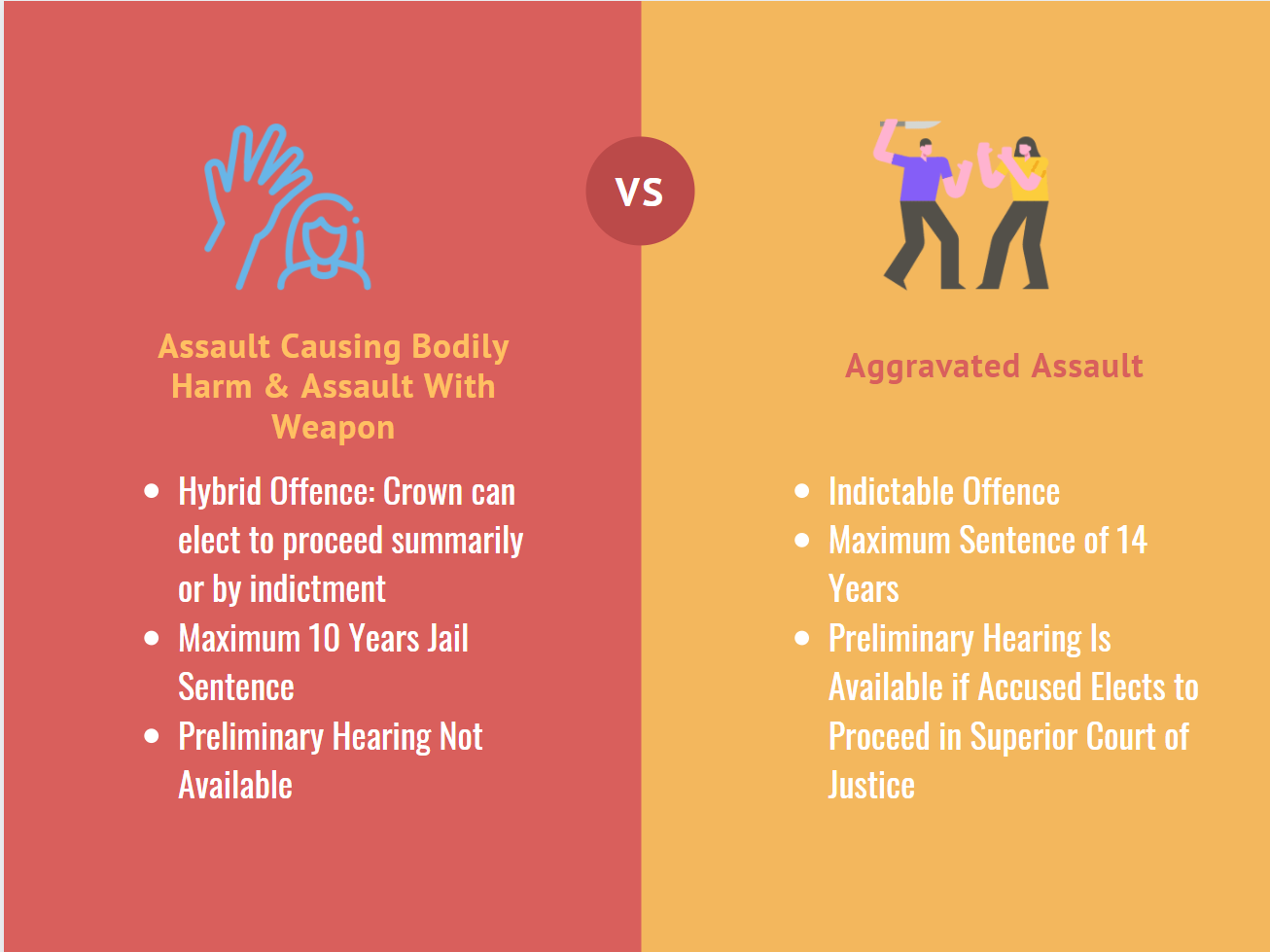 What are peace bonds?

A peace bond is a type of criminal court order that requires an individual to be on ‘good behaviour’. With respect to assault, this typically means keeping the peace and staying away from the alleged victim for a certain period of time specified in the bond (usually one year). Failure to do so can result in the accused person being arrested and brought back to court. A criminal assault lawyer can negotiate to remove the no-contact condition in circumstances where the alleged victim wishes to have contact with the accused.

Will I get bail in an assault case and what type of conditions will I be on?

One of the most important steps in any criminal proceedings is securing an accused person’s release. Upon arrest, the police have the discretion to release the accused on a promise to appear or on an undertaking to a police officer. The accused person will be required to sign the promise to appear, which guarantees that they will show up for their next court appearance. An undertaking to a police officer is a conditional release where the accused person agrees to certain conditions, such as staying away from the alleged victim.

In most domestic assault cases, the accused person will likely be held for a bail hearing. If you are not granted release by police, then your domestic assault lawyer can ask the court for interim judicial interim release pending trial. At the bail hearing, the Crown Attorney may seek the accused person’s detention – usually by showing that the person is likely to flee or re-offend. Often an individual facing an assault charge will be released with conditions, such as no contact with the alleged victim.

It is important to have a criminal lawyer who understands assault law and can attend the bail hearing on your behalf. They will help you put together a strong plan of release and work on having you are released with the fewest conditions possible. 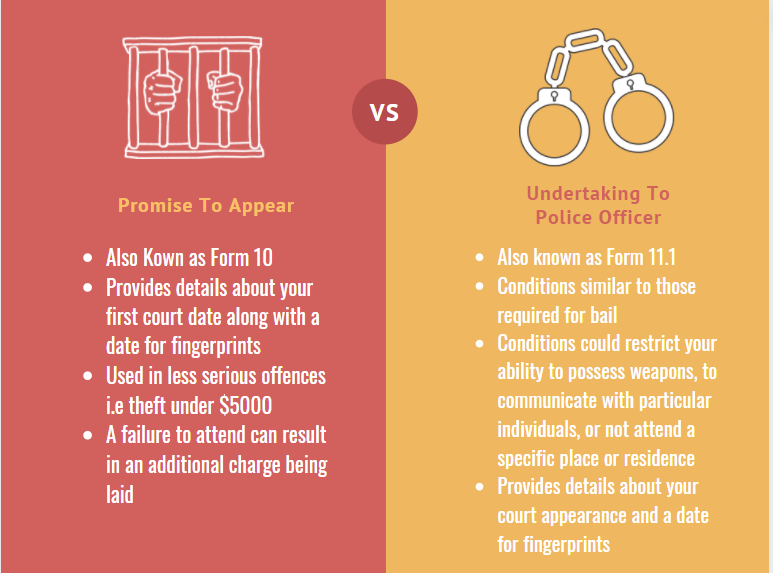 How long does it take for assault charges?

Assault cases are not always straightforward and can take months to resolve in court. An assault lawyer will have extensive experience working with assault cases and can make sure that everything is done to ensure a swift resolution. They will work closely with the Crown prosecutor on your assault case in order to bring about an early resolution if possible or fight for you at trial if necessary.

The time it takes to resolve an assault charge can vary depending on a number of factors, such as the severity of the assault, whether there are any previous convictions, and how many charges are being laid. In some cases, assault charges may be resolved through negotiations before going to trial. However, in more serious assault cases where jail is a real possibility, assault charges are often resolved through a trial, which can take over a year. Depending on the circumstances of your assault case and how busy the courts are at that time, an assault charge can take anywhere from several months to more than two years to resolve.

If I have been charged with assault, do I need an assault lawyer?

A criminal conviction for assault has serious consequences that include jail time, fines, and a criminal record. If you have been charged with assault or any offence, do not wait for it to go to court before speaking to an experienced assault lawyer about your case. The sooner you speak with a lawyer the better chance we will have to defend your rights in court. For example, consulting with a lawyer at the early stage can prevent you from providing a statement to the police, which could be used against you in court.

Assault charges such as aggravated assault or assault with a weapon are considered very serious by most judges and carry a presumption of jail. Although assault is considered less serious than assault causing bodily harm, it can still be life-altering for the accused if found guilty. The right assault lawyer will know how to defend your rights and work towards getting you the best possible outcome in court.

A criminal record for assault can affect your ability to get a job, travel and even volunteer. It is important that you speak with an assault lawyer as soon as possible if you have been charged with assault or any offence.

Will I go to jail for first-time assault in Canada?

Generally speaking, a first-time common assault conviction in Canada will not result in jail time. However, the accused will likely be subject to other conditions such as community service and/or attending counselling. In more serious assault cases where there is a risk of jail time, an assault lawyer can work towards getting you the best possible outcome in court. It is important to remember that assault charges should not be taken lightly and it is always advisable to speak with a lawyer if you have been charged with any offence.

What is the penalty for an assault charge?

The penalty for assault can vary depending on a number of factors, such as the severity of the assault, whether injuries were inflicted and whether there are any previous convictions. In some cases, assault charges may be resolved through negotiations before going to trial. However, in more serious assault cases where jail is a real possibility, assault charges are often resolved through a trial. Depending on the circumstances of your assault case and how busy the courts are at that time, an assault charge can take anywhere from several months to more than a year to resolve.

A criminal record for assault can have severe consequences which affect your ability to get a job, travel and even volunteer. It is important that you speak with an assault lawyer as soon as possible if you have been charged with assault or any offence. The right assault lawyer will know how to defend your rights and work towards getting you the best possible outcome in court.

Kahlon Law offers free consultations so please do not hesitate to contact us today.