Assault with a Weapon Lawyer

Assault with a Weapon Lawyer

If you or your loved one is facing criminal charges for assault with a weapon, the consequences could be life-changing. It may seem like no one is on your side.

It is essential to hire an experienced criminal defence lawyer as soon as possible to ensure the best possible outcome of your case. Contact us today for a consultation to discuss the unique facts surrounding your case, and let us get to work defending the allegations made against you!

What Is Assault with a Weapon According to the Criminal Code?

Assault is defined under section 265 of Canada’s Criminal Code as the deliberate application of force against someone, either directly or indirectly, against their will. A person can be prosecuted for assault with a deadly weapon or assault causing bodily harm according to section 267 of the Code if they:

Anyone who uses a weapon or an imitation of a weapon to knowingly exert force or threaten to apply force to someone else can be accused of assaulting that person with a weapon. Assault with a weapon might be as simple as throwing a cellphone at someone.

In the event of assault causing serious bodily harm, the assault must result in physical harm to the victim. The injury must interfere with the victim’s wellbeing or comfort significantly.

What Is a Weapon?

Section 2 of the Code defines weapons as any object used, intended to be used, or designed to be used to:

Moreover, proving that the weapon was not used to inflict injury is insufficient to dismiss the criminal charges. A charge could still be made out if the Crown Attorney can establish that the accused used the weapon during the crime or intimidated the alleged victim

Here are a few examples of weapons used in many cases of assault with a weapon:

The Consequences of Assault with a Weapon

Assault with a weapon is considered a hybrid offence. The Crown Attorney will decide whether the crime will be classified as a somewhat less serious summary conviction or an indictable offence, which is more serious and carries severe consequences. The circumstances of the assault, such as the use of a weapon or the severity of the injuries inflicted, will be taken into account when making this determination.

An assault with a weapon in a domestic context will likely require a bail hearing. Upon release, the individual will be subjected to certain bail conditions i.e. prohibiting contact with the victim.

The Penalties for a Summary Conviction Versus an Indictable Offence 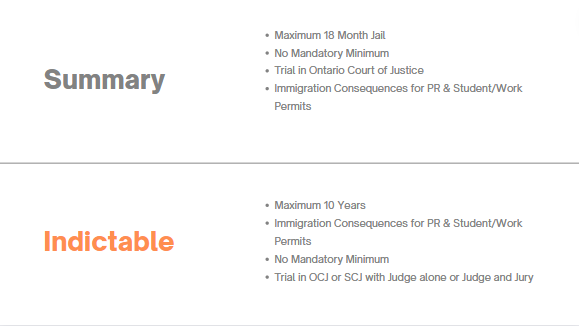 Anyone convicted or found guilty of assault with a weapon can face a maximum penalty of 18 months in jail for a summary conviction. If the accused is found guilty of a more serious criminal offence, he or she faces a maximum sentence of ten years imprisonment.

Discuss your options with your criminal defence lawyer to determine the best possible outcome for your case. The court will be more understanding of your circumstances as a first-time offender. Expect to receive a stiffer sentence if it is not your first offence.

What Must Be Proved for a Criminal Conviction? 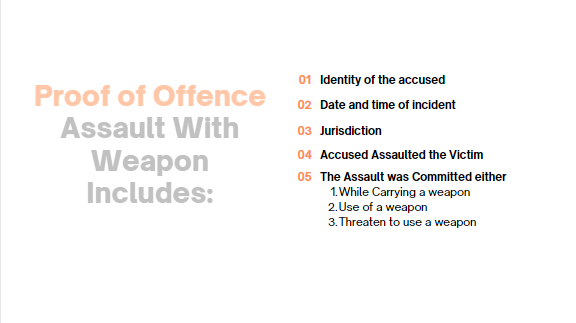 If the Crown prosecutor finds you guilty, he or she will need to prove the following without a reasonable doubt:

What If the Victim Gave Consent?

Even if the victim gave their consent, the public policy stipulates that using weapons in a consensual scenario is not justified in cases of assault with a weapon. As a result, “consent,” a plausible defence to an assault simpliciter allegation, will not be a viable defence in such cases.

Why Choose Us to Fight Your Case?

With so many criminal defence lawyers in Toronto, you might be wondering why you should choose Kahlon Law to represent you in an assault with a weapon case. Here are a few reasons to choose us:

Facing Assault with a Weapon Charges? We Can Help!

If you are prosecuted for an assault with a weapon or an assault causing bodily harm, the consequences can be life-changing. It can result in a permanent criminal record and jail time. It could also affect your reputation or result in a rejection of your application for citizenship. To ensure that you have the best possible chance at having the charges dropped or getting a lighter sentence, contact Kahlon law today to book your case review!