How to Impact Your Criminal Case by Hiring a Domestic Assault Lawyer?

You have been charged with domestic assault, and now you are facing criminal charges. You want to know what your next steps should be? Should you plead guilty? Can you avoid a criminal record? If you want to make the most of your criminal defence case, then hiring a domestic assault lawyer is an important first step.

The criminal justice system can be complicated and overwhelming for those who don’t have legal knowledge. That is why it’s so important to find an experienced domestic assault lawyer that will help guide you through this process and provide the best representation possible. In this blog post, we will explore how hiring a criminal defence attorney can impact your domestic assault charges!

What are domestic assault allegations?

Domestic assault allegations can include a number of different charges, such as criminal harassment, threats, sexual assault, and assault. These types of offences typically involve violence or threatening behaviour between family members, spouses, or dating partners.

What are the possible consequences of a domestic assault conviction?

If you are convicted of domestic assault, you could face a number of different penalties, such as jail time, probation, and fines. You may also have to attend counselling or anger management classes. It is important to note that criminal convictions will be on your record and could impact future job opportunities, family law proceedings, international travel, or volunteering.

Penalties for domestic assault can vary depending on the severity of the charge and the unique circumstances of each criminal case. For instance, a simple domestic assault charge could result in a criminal record and probation or up to six months imprisonment, while aggravated assault charges carry much harsher penalties such as 18 months imprisonment. Due to the serious consequences, it is important that you consult with a lawyer prior to you deciding to plead guilty or agreeing to any resolution including a peace bond. A guilty plea might seem like an attractive option as resolving the case may permit contact with your partner; however, it is important to seek legal advice from a lawyer on your domestic violence charge.

In order to avoid a criminal conviction, it is important to have a criminal lawyer represent you in court. An experienced criminal law lawyer will be able to review the evidence against you and develop a strong defence strategy.

Do I need a domestic assault lawyer?

If you have been charged with domestic assault, it is important to hire a lawyer as soon as possible. By hiring an assault lawyer, you can better prepare yourself for your upcoming court case and make the most of this criminal law process!

A person accused of a simple assault is unlikely to face jail time, especially if they are a first-time offender. If the assault charge does not involve injuries and the spousal assault did not take place in front of a child, then domestic assault lawyers will likely be able to negotiate a criminal court diversion. This will typically involve the completion of counselling followed by a 12-month peace bond. More serious criminal code charges such as assault causing bodily harm or aggravated sexual assault charges will unlikely be applicable for the resolution by way of a peace bond.

If you have been charged with domestic assault, it is very important to find the right criminal defence lawyer for your case! Domestic violence lawyers will offer legal advice throughout this process from pre-charge, through the criminal justice system, to trial date and sentencing. Your criminal lawyer will be your advocate and will work to get the best possible outcome for your case.

Domestic violence lawyers will examine the evidence against you and determine whether there are any weaknesses in your case. The law firm must first identify all of the relevant disclosure including, police reports, witness statements, 911 calls, videos or audio recordings that could have been obtained by the prosecution. They will then work to discredit any evidence that is unfavourable to you and try to build a defence strategy.

If there are no reasonable defences, a domestic assault lawyer may be able to negotiate a plea bargain with the crown attorney. This could involve pleading guilty to a lesser charge in exchange for lighter penalties including conditional discharge or no jail time. Your criminal lawyer will work to get you the best possible outcome in domestic violence cases including withdrawal of the criminal code charge.

If you are considering hiring a criminal defence lawyer for domestic violence cases, please contact us today! Our law firm would be happy to provide you with a free consultation.

Will a domestic assault lawyer prevent a criminal record?

A criminal defence lawyer will work on resolving your matter in the most efficient and effective way possible. Any domestic assault lawyer cannot guarantee that criminal charges will be dropped, however, they can help you understand your options and make the right decisions to protect yourself in court! For example, they can explain to you the process involved in a domestic assault charge along with the possibility of it resolving by a peace bond.

A criminal defence attorney can also represent you at trial if necessary. If convicted after a criminal trial, an assault lawyer could still work with the prosecutor on reducing sentencing penalties.

What are the benefits of hiring a lawyer to defend domestic assault charges? 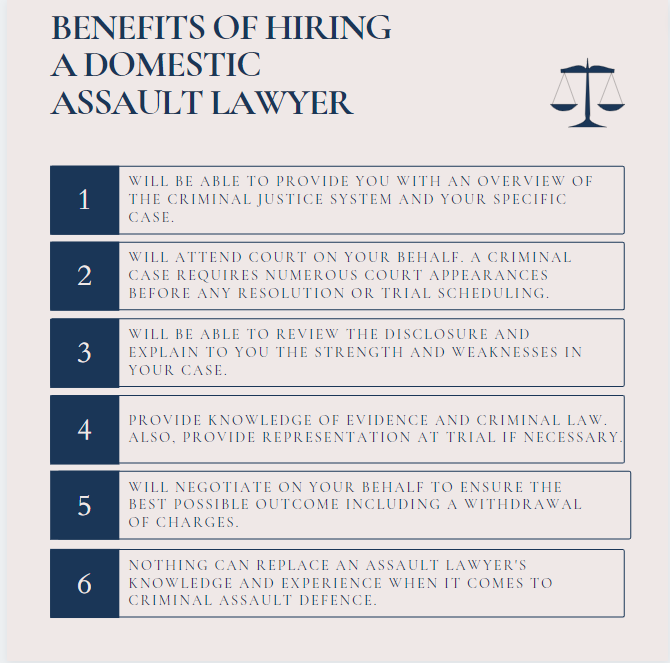 Although you do not require domestic assault lawyers to represent you for a domestic assault allegation, it is highly recommended. If you are representing yourself for criminal charges, you will not be able to offer the best possible defence on your behalf and there may even be some things that can negatively impact your case without a criminal lawyer present! Any criminal offence can have serious consequences, including domestic disputes.

There are many benefits that come with working with an assault attorney for your criminal case! A domestic assault lawyer will review and evaluate every piece of evidence against you and help you understand what it means in court. They can also provide key insights into how to bespeak your criminal case to the prosecutor and judge.

Your criminal lawyer could also negotiate with the Crown attorney’s office on a resolution that may help you avoid jail time or get charges dropped entirely! Any criminal defence attorney will do what is in their power to defend you in criminal court, however, nothing can replace an assault lawyer’s knowledge and experience when it comes to criminal assault defence.

Can I change my bail to allow contact with my partner?

Bail conditions are set by the criminal courts, and they aim to prevent an accused from reoffending or interfering with the administration of justice. This means that even if you want to contact the alleged victim after being charged for domestic assault, it may not be possible due to your bail conditions. It is best to speak with a criminal defence lawyer about what you can do next.

A bail variation can be requested to allow you and your partner or spouse contact with one another, but this is not always possible. The criminal courts will only agree to a bail variation if there are exceptional circumstances that merit such an exception. This can be difficult for those who face domestic assault charges as the crown attorney often opposes any type of bail variation between partners or spouses.